Herzog takes off for Brussels ahead of Holocaust address to EU

President Isaac Herzog took off early Wednesday morning for a two-day trip to Brussels that will include an address to the European Parliament to mark International Holocaust Remembrance Day.

Before boarding the plane, Herzog said he will “have the privilege of appearing before the European Parliament” and speaking for “the State of Israel, the nation-state of the Jewish people,” a “democratic and strong” country that “extends its hand in peace.”

In his upcoming address, Herzog said he will “tell the story of the victims of the Holocaust, and the survivors of the Holocaust” and “will be moved to think that 80 years ago, it was impossible to imagine that a leader of the state of the Jewish people would stand before the European Parliament and mention the most terrible event in the history of humankind.”

Herzog will begin the visit at the Royal Palace of Brussels on Wednesday to meet with Belgium’s King Philippe. He is then scheduled to visit Brussels’s Athénée Ganenou Jewish school and Great Synagogue of Europe to meet with members of the Jewish communities of Brussels and Antwerp.

On Thursday, the Israeli president will deliver his main address before the European Parliament at a special plenary session to mark International Holocaust Remembrance Day.

President Isaac Herzog boards a plane to Brussels on January 25, 2023 for a two-day trip that will include an address to the European Parliament to mark International Holocaust Remembrance Day. (Haim Zach/GPO)

Herzog said in his short statement before departure that in all these encounters, he will “raise the enormous challenge facing us and the whole Middle East, as Iran presses forward in its pursuit of nuclear weapons, unleashes terror all over the Middle East, and provides weapons that are used against the Ukrainian people.”

Iran has been selling lethal drones to Russia to support its almost year-long war on Ukraine. These weapons have been used in Russian strikes on Ukrainian civilians and infrastructure sites.

Herzog said will also discuss the plight of the Israeli captives in the Hamas-ruled Gaza Strip, and call for their immediate release by the Palestinian terror group. Hamas is holding captive two Israeli men, alongside the remains of two soldiers killed during Israel’s war with Gaza-based fighters in the summer of 2014. Israeli authorities have been quietly engaged in fruitless negotiations for their release for years.

A day before his departure, the president said in a statement that the upcoming address on Thursday to European parliamentarians and Holocaust survivors “fills me with a sense of sacred trepidation.”

Turning to Israel’s relationship with the EU and its member states, Herzog said the ties “have an impact on almost every area of our lives as a people and as a state—from the economy to security, academia, science, culture, and so much more.”

Herzog is joined on the trip by two Knesset members, Likud MK Boaz Bismuth from the governing coalition, and Yesh Atid’s Merav Ben-Ari from the opposition.

The visit comes as Herzog has sounded warnings that Israel is on course to tear itself apart amid the government’s planned radical shakeup of the judicial system and mounting public opposition. 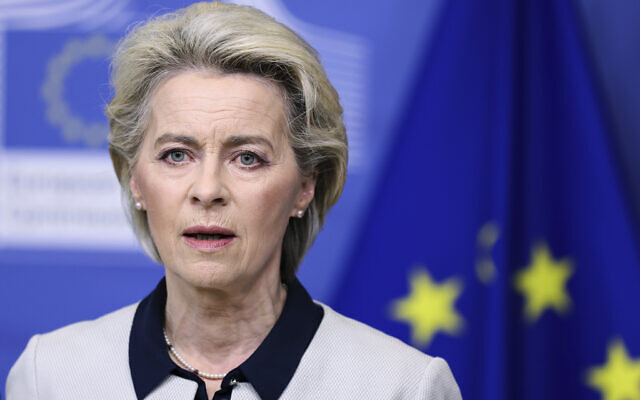 Israel’s European partners are watching the new government closely — including the outcome of its judicial overhaul fight — after a high point in Israel-EU ties during the Naftali Bennett-Yair Lapid government.

In October 2022, the EU-Israel Association Council met for the first time since 2012. The meeting is meant to occur annually between Israel and the EU to cover matters of mutual concern.

While trade, research and energy ties between Jerusalem and Europe are expected to blossom, they are also likely to clash over diplomatic issues like the Temple Mount, East Jerusalem, and settlement construction in the West Bank.

The EU and Israel also do not see eye-to-eye on Russia’s invasion of Ukraine. While the EU and many member states have reacted decisively to punish Moscow, Israel has maintained a neutral stance, condemning the invasion and offering humanitarian aid to Kyiv but avoiding measures that would threaten ties with Russia.