The Biden administration announced Monday that, concurrently with the European Union and the United Kingdom, it has slapped sanctions against 10 additional Iranian officials connected to the suppression of the ongoing anti-regime protests throughout the Islamic Republic.

“Azimi and Asiabani command IRGC units that have allegedly committed some of the worst acts by Iranian security forces since the beginning of protests in September 2022,” the Treasury Department said in a statement, adding that the military officials had led forces who used live fire to kill and wound dozens of protesters.

“The IRGC has shelled vehicles attempting to deliver blood bags to those wounded in local hospitals, preventing their delivery,” the statement added.

The latest round of sanctions will also target the IRGC’s Cooperative Foundation, described by the US as an “economic conglomerate,” along with five of its board members. The entity is believed to control manufacturing and construction in Iran as well as other large sectors of the country’s economy.

At least four people have been executed since the demonstrations began, following rapid, closed-door trials. At least 519 people have been killed and more than 19,200 others arrested, according to Human Rights Activists in Iran, a group that’s been monitoring the rallies.

Iranian officials have expressed outrage over the listing move by the EU, warning Sunday that European countries would face retaliation if it went ahead.

“The parliament [of Iran] is working to place elements of European countries’ armies on the terrorist list,” Iranian Foreign Minister Hossein Amir-Abdollahian said on Twitter.

The 27-nation bloc has already imposed three rounds of sanctions on Iranian officials and organizations — including government ministers, military officers and Iran’s morality police — for human rights abuses over the protests that erupted in Iran in mid-September over the death of Mahsa Amini.

The EU noted while announcing the new sanctions that it will not be adding Iran’s Islamic Republic’s Revolutionary Guard Corps to the EU’s terror group blacklist, as the US did in 2019 under then-US president Donald Trump.

At a press conference in Washington last week, US Secretary of State Antony Blinken warned Tehran of “consequences” for its actions at home and involvement in Russia’s war efforts in Ukraine.

It is unclear how impactful additional sanctions are at this point, given that Iran’s economy has long been shut out from American investments and Tehran has been working to expand financial ties with non-Western countries and entities in order to compensate. 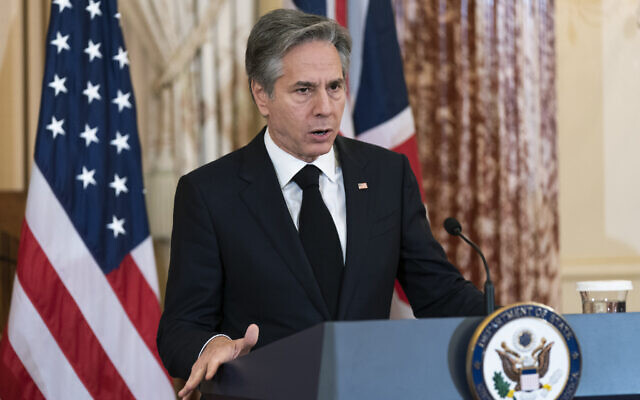 US Secretary of State Antony Blinken speaks during a news conference with British Foreign Secretary James Cleverly, in the Benjamin Franklin Room at the State Department, January 17, 2023, in Washington. (AP Photo/Manuel Balce Ceneta)

During last week’s press conference, Blinken also doubled down on the assertion that the US no longer considered reaching an agreement with Iran over its nuclear program a priority. He said Iran had long rejected the possibility of reviving the original agreement from 2015, known as the Joint Comprehensive Plan of Action.

In 2018, Trump withdrew from the deal, which traded sanctions relief for curbs on Iran’s nuclear program. He then instituted a “maximum pressure” sanctions regime targeting various Iranian sectors, leading Tehran to respond by expanding its nuclear program in violation of the JCPOA.

While US President Joe Biden vowed to try and revive the deal when entering office, his administration has indicated in recent months that it has abandoned the possibility. Reasons for this include Tehran’s increasingly untenable position, demanding at one point that the US remove the IRGC from its list of Foreign Terrorist Organizations; Iran’s cooperation with Russia in the latter’s invasion of Ukraine; and the anti-regime protests that have swept Iran since mid-September, which Tehran has accused Western powers of orchestrating.

In a video that surfaced last month, Biden said that the prospect of reviving the deal with Iran was “dead,” but that he would not announce this publicly.

Tobias Siegal contributed to this report.