Radical settler activists on Sunday attempted to reestablish an illegal outpost dubbed Or HaChaim in the northern West Bank, two days after police and Civil Administration forces evacuated and destroyed structures at the site.

Several videos from the nascent outpost, which is east of the large Ariel settlement, showed activists erecting various structures in the area and the moment that security forces approached to demand the activists halt work and disperse.

Activists said around 100 people were at the outpost and resisting evacuation, with “dozens of police officers” involved in the operation to remove them, which continued beyond night-fall.

According to the Border Police, activists resisted the evacuation, leading to the detention of at least six people.

A lawyer for the right-wing legal advocacy organization Honenu was headed to the area to provide legal advice for some 15 youths whom he said had been detained during the operation.

A statement put out in the name of the families said they would “continue to cling to the hilltop even if we are evacuated 100 times.”

Security forces move in to evacuate an illegal settlement outpost established in the West Bank on January 20, 2023. (Courtesy)

The activists also condemned Defense Minister Yoav Gallant for again ordering the evacuation of Or HaChaim, saying he was “continuing the policies of the previous, left wing government.” They also said “the nation chose Gallant in order to advance right-wing policies, and now it appears he is implementing the policies of the left.”

Five families established Or HaChaim on Thursday night, located next to the Migdalim settlement and overlooking the “Trans-Samarian highway.” Among those involved was grandson of the late Rabbi Chaim Druckman, a leading religious Zionist figure, for whom the outpost is named.

The outpost was evacuated and destroyed Friday on Gallant’s order, triggering tensions within the coalition between Prime Minister Benjamin Netanyahu’s Likud party and the ultra-nationalist Religious Zionism and Otzma Yehudit faction.

Under the terms of the coalition agreement, Religious Zionism leader Bezalel Smotrich was made a minister within the Defense Ministry and given authority over the Civil Administration, which is in charge of civilian affairs in the West Bank, including enforcement against illegal construction.

The purpose of this power transfer was to enable Smotrich — who is also finance minister — to reduce enforcement against illegal Israeli construction in the West Bank in line with his ideological support for the settlement movement. It would also position him to increase enforcement against illegal Palestinian construction, in line with his vehement opposition to the establishment of a Palestinian state.

On Friday, Smotrich issued a statement saying he had told the Civil Administration, an agency within the Defense Ministry, to halt the evacuation of Or HaChaim but that Gallant had regardless authorized the action. 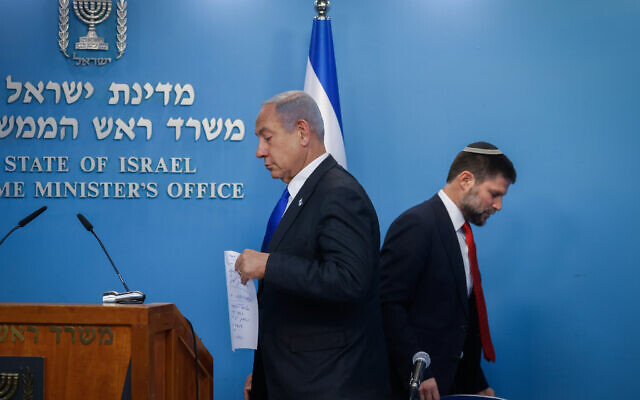 Smotrich is yet to comment on the Sunday’s evacuation, though a member of his party spoke out against it.

“The coalition agreements establish that on this issue responsibility is with Smotrich,” Religious Zionism MK Simcha Rothman told Army Radio.

“The coalition agreements are the basis of the government, and if someone violates them there will be consequences.”

Smotrich, whose party seeks to dramatically expand settlement construction and annex the entire West Bank, demanded in response that Netanyahu both support West Bank settlement and give him power over determining settlement and open lands usage in the West Bank’s Area C, enshrined in coalition agreements.

National Missions Minister Orit Strock, also of Religious Zionism, told Army Radio on Sunday morning that the far-right party joined the government on the promises made in the coalition agreements, and that it expect them to be followed. 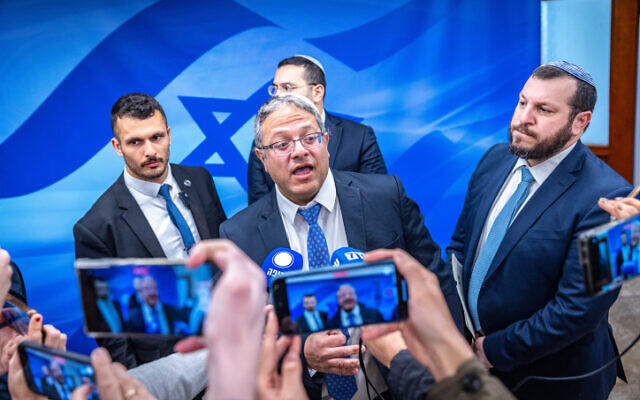 The leader of Otzma Yehudit presented the cabinet with a document with aerial photos showing alleged illegal Palestinian construction and the precise coordinates of the structures.

“The law is the law and there is one law for all. On my watch, I will not accept racism against Jews. Just as the defense minister chose to destroy a Jewish outpost, we demand that illegal Arab construction in Judea and Samaria [the West Bank] be destroyed,” Ben Gvir said.

Ben Gvir’s document included pictures of alleged illegal structures close to the Palestinian village of Muchmas just north of Jerusalem; in As-Sawiya, close to Nablus; Mughayir in the Ramallah region; Jit, east of the Kedumim settlement in the northern West Bank; and Beit Aroub in the southern West Bank, south of the settlement of Efrat.

Ben Gvir’s office declined to disclose the source of the information, but said the construction had been reported to the Civil Administration — the unit responsible for enforcement against illegal construction in the West Bank — “in real time.”

The Civil Administration did not respond to a request for comment regarding the accuracy of Ben Gvir’s document.

According to the right-wing Regavim organization, which tracks illegal Palestinian construction in the West Bank, over 5,500 illegal structures were built in Area C in 2022.

Although the number of illegal Israel structures is far lower, according to Regavim, thousands of housing units are constructed in the West Bank Israeli settlements every year.

According to the left-wing Peace Now organization, construction began on 22,987 housing units from 2010 to 2021.

Authorization for Palestinian construction is very rarely issued. Under the terms of the 1995 Oslo Interim Agreement, control over Area C was meant to be gradually handed over to the Palestinian authority.

Carrie Keller-Lynn contributed to this article

Tunisians to vote in second round of poll for defanged parliament