Two Arab Israeli terrorists released in recent weeks after serving 40 years in prison for the murder of an Israel Defense Forces soldier were rearrested Saturday and questioned over online content they have since posted that allegedly contains incitement to terrorism, Hebrew media reported.

The development came just two days after Maher Younis was released, and two weeks after his cousin Karim Younis was freed.

The pair, both from the town of ‘Ara in northern Israel, murdered Cpl. Avraham Bromberg in 1980. They were given life sentences that were commuted to 40 years by then-president Shimon Peres in 2012.

The police interrogation, which was reportedly ordered by National Security Minister Itamar Ben Gvir, lasted several hours and the pair were then released. Ben Gvir received updates on the matter during the weekend.

Prosecutors will have to decide whether to file a fresh indictment against Maher, Channel 12 news reported.

Ben Gvir has been vocal in his push to mute public celebration of the terrorists’ release as much as possible. After rebuking police for enabling Karim to be feted in his hometown earlier this month, police took steps to prevent revelry following Maher’s release, including enforcing a ban on displaying the Palestinian national flag.

Arab Israeli Karim Younis is carried by friends and relatives following his release after 40 years in an Israeli prison for kidnapping and murdering an Israeli soldier, on January 5, 2023, in the northern Israeli town of ‘Ara. (AHMAD GHARABLI / AFP)

The cousins are members of Israel’s Arab minority, many of whom identify as Palestinians.

Members of the Younis family were reportedly summoned by police before Maher’s release and told they could not set up a welcome tent at their home for guests. They were also warned that any Palestinian flags displayed would be seized. The family committed to not holding public celebrations for the release.

Video circulated on social media showed Younis’s mother greeting her son with a white cloak and a garland of flowers. The pair were surrounded by a throng of people, though many appeared to be members of the media.

After he was received by family and friends, Maher Younis urged the “unification of all Palestinian factions because the security prisoners are suffering a lot,” according to the Kan public broadcaster.

“Together we may succeed. We are in a difficult political period and we need to fight intelligently,” he said. “We are a nation of heroes. We do not surrender. The state asked not to celebrate. Regards to all the members of the prisoners’ families. I hope they will be released soon.”

Younis also received a congratulatory phone call from Palestinian Authority President Mahmoud Abbas who hailed the former prisoner as a “symbol of the Palestinian people. According to Palestinian media reports, Younis told Abbas, “I am prepared to serve another 40 years in order to liberate the homeland of Palestine.

In the days after Karim Younis’s release, celebrations were held in his hometown. Three senior Palestinian Authority officials who paid him a visit subsequently had their entry permits to Israel revoked by Defense Minister Yoav Gallant.

Afterward, Ben Gvir summoned police commissioner Kobi Shabtai for a dressing-down following the celebrations, in a first rebuke of police by the new far-right minister, who demanded and received extensive powers over the force’s policy in recent coalition negotiations. 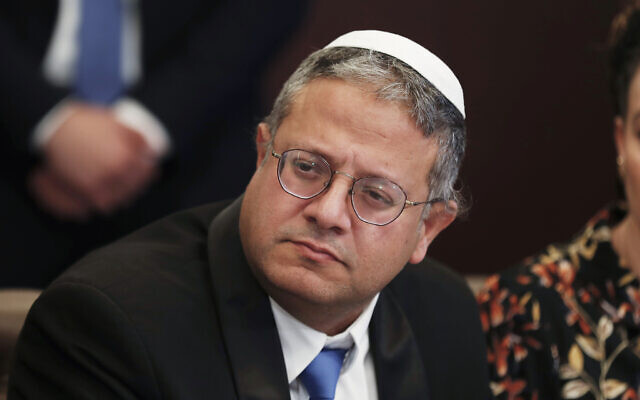 In the attack in 1980, the two offered Bromberg a ride as he was heading home from his army base in the Golan Heights, then overpowered him, shot him in the head, and stole his weapon. They left him on the side of a road, where he was found and brought to a hospital, but he died days later. The killers were arrested two years later and sentenced in 1983.

Ben Gvir has spoken out in support of capital punishment for terror offenses. He has been a critic of police enforcement efforts against Jewish nationalists and what he considers a too-soft approach toward non-Jewish suspects.

Right-wing lawmakers are working on passing a bill to revoke the citizenship of convicted terrorists that cleared an initial reading last week.