US Ambassador to Israel Tom Nides denied on Tuesday that he or the Biden administration have imposed a boycott against far-right National Security Minister Itamar Ben Gvir but said Washington would primarily be working with Prime Minister Benjamin Netanyahu as it adapts to bilateral ties under the new hardline Israeli government.

“There’s no boycott. I don’t do boycotts… We are going to work with the Israeli government. It is a democratically elected government,” Nides responded after being prompted on the matter during an interview with the Kan public broadcaster. “We’ll work with everyone. But in principle, [who] I’ll be working with is the prime minister.”

The preference to work with Netanyahu is one that has been vocalized by Biden officials in recent weeks and it is part of what they say is a new approach that aims to hold the longtime premier accountable for the policies of some of his far-right coalition partners, such as Ben Gvir and Finance Minister Bezalel Smotrich, of the Religious Zionism party.

“The prime minister told us he has his hands very firmly on the wheel. That’s who we’re dealing with,” Nides told Kan.

Behind closed doors though, Nides has told colleagues that the US is not planning to meet with Ben Gvir, two sources familiar with the matter told The Times of Israel last month.

Netanyahu’s new government got off to a relatively rough start in its ties with the US after Ben Gvir — a self-described disciple of the late racist rabbi Meir Kahane — paid a visit to Jerusalem’s flashpoint Temple Mount last week.

Nides issued a statement declaring that he had “been very clear in conversations with the Israeli government on the issue of preserving the status quo in Jerusalem’s holy sites” — referring to the policy under which non-Muslims are allowed only to visit the Temple Mount under strict conditions and Muslims are allowed to visit and pray at the site, which they refer to as the Noble Sanctuary.

Nides added in the statement that “actions that prevent [the preservation of the status quo] are unacceptable.”

He struck a different tone on Tuesday though when asked whether Ben Gvir’s visit proves that Netanyahu “does not have his hands on the wheel.”

“Yes, [he does]. He has said over and over again that he is not going to allow for the status quo to change at the Temple Mount. And we take him at his word,” Nides said.

Preserving the status quo at the Temple Mount has been one of the Biden administration’s red lines in its ties with the new Israeli government, which includes members such as Ben Gvir who have long called for upending the policy. Another issue over which US officials have said they are prepared to push back are any steps toward annexation of the West Bank.

Nides said that Netanyahu understands the Biden administration’s stance in favor of “keep[ing] a vision of a two-state solution alive” as well as its opposition to “legalizing outposts and massive settlement expansion.”

On Monday, US State Department spokesman Ned Price condemned the sanctions approved by the Israeli government against the Palestinian Authority over Ramallah’s successful effort to have the International Court of Justice weigh in on Israel’s conduct in the Palestinian territories.

Asked for his reaction to the planned legal overhaul announced last week by Justice Minister Yariv Levin, Nides said it was not his place to comment on the matter. “The Israeli people don’t want to be lectured by America… Our job is not to impose our will on every decision this government makes vis a vis issues like judicial reform.”

Last week, two US officials told The Times of Israel that the Biden administration was not planning to pressure Netanyahu against implementing the judicial reforms announced by Levin.

The overhaul provides for severely restricting the High Court’s capacity to strike down laws and government decisions, passing an “override clause” enabling the Knesset to re-legislate such laws; giving the government control over the selection of judges; preventing the court from using a test of “reasonableness” against which to judge legislation and government decisions; and allowing ministers to appoint their own legal advisers, instead of getting counsel from advisers operating under the aegis of the Justice Ministry. 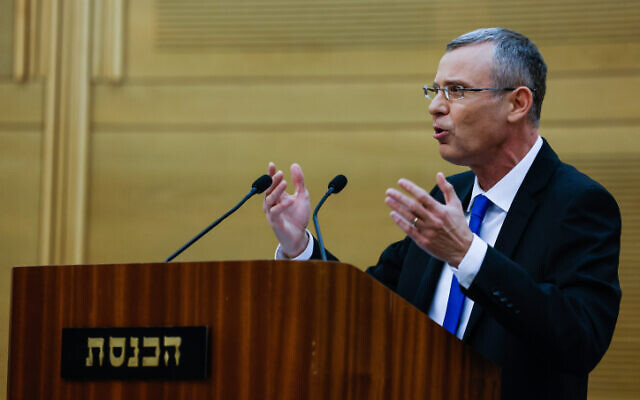 A source familiar with the matter speculated at the time that the administration may offer vague support for the importance of a strong judiciary if journalists ask the US to comment on the matter, but that the policy would not extend much further. The State Department’s general statement days later appeared to confirm that speculation.

Regarding Israel’s position on the war in Ukraine, Nides said Tuesday that he has no doubt Jerusalem and Washington will “be on the same page.” Last week, Foreign Minister Eli Cohen said the new government would talk less publicly about the Russian invasion, sparking fears that Israel would be shifting its stance closer to that of the Kremlin. Nides said the US hopes Israel, like almost every other country, will do more to support Ukraine.

The ambassador was also asked to provide a status update regarding his effort to have Israel added to the US Visa Waiver Program. To qualify, Israel needs to lower the rejection rate of its citizens’ visa requests to below three percent annually. Nides said the Knesset will have to quickly pass several pieces of relevant legislation and that Israel will also have to commit to a policy of “reciprocity” regarding its treatment of Arab Americans at border crossings in order for Israel to be included in the waiver program. Several Democratic lawmakers have warned in recent months that Israel’s treatment and policies toward Palestinian travelers in the West Bank risk Jerusalem’s acceptance into the US program.

Meanwhile, White House National Security Adviser Jake Sullivan is slated to visit Israel next week for meetings with senior officials. Secretary of State Antony Blinken is planning to pay his own visit in the weeks that follow, according to an Israeli official, who said that the trip will lay the groundwork for Netanyahu’s own visit to Washington.

‘The Water is Surrounding Us’: Gaza Grieves as Israel Opens Floodgates