Attorney General Gali Baharav-Miara is reportedly close to ordering Benjamin Netanyahu to take a leave of absence as prime minister on the grounds that his government’s plans to overhaul the judiciary amount to a breach of conflict of interest rules that bar him from involvement in matters that might impact his ongoing criminal trial for corruption.

The Kan public broadcaster reported Friday that Baharav-Miara and her aides are closely studying a 2021 decision by Supreme Court Justice Hanan Melcer, who ruled that the attorney general alone has the authority to make such a call. Channel 12 news went further, reporting that Baharav-Miara is close to making the unprecedented decision.

Neither network cited a source in their reports, which came days after Baharav-Miara notified Netanyahu that he remains bound by conflict of interest rules, first drawn up in late 2020 by former attorney-general Avichai Mandelblit, barring him from making senior law enforcement and judicial appointments, or getting involved in legislative matters that may impact his ongoing trial.

Baharav-Miara’s notice was given as a response to a petition demanding she draw up an updated conflict of interest agreement for Netanyahu. The attorney general rejected the petition, calling it “irrelevant” since she ruled that the previous agreement drawn up by Mandelblit as still in effect.

Netanyahu is on trial in three corruption cases on charges of fraud and breach of trust, as well as bribery in one of them. He denies wrongdoing and claims the charges were fabricated in an attempted political coup led by the police, the state prosecution, the media, and left-wing rivals.

Netanyahu’s new government is in the midst of pushing contentious legislation that will weaken Israel’s judiciary. The overhaul proposed by Justice Minister Yariv Levin would drastically limit the High Court of Justice’s power of judicial review of legislation; allow the Knesset to re-legislate laws if the court strikes them down; give the government control over judicial appointments; turn ministry legal advisers’ into political appointees, and make their counsel non-binding.

Levin on Monday argued that Netanyahu’s indictment convinced the public of the need to reduce the powers of the judiciary, for the first time linking his controversial package of laws aimed at reining in the courts to the premier’s legal travails — a linkage that Baharav-Miara has clarified cannot be made if Netanyahu wants to remain in his position.

While Levin has been the face of the judicial proposals for now, Netanyahu has weighed in publicly to support them and discussed them during a Likud faction meeting earlier this week.

Channel 12 also reported Friday that Netanyahu has been wary of agreeing to Shas leader Aryeh Deri’s demand that he be named alternate prime minister because he believes that filling the role will make it easier for Bahrav-Miara to order the Likud leader step aside over the breach. Netanyahu currently has no designated replacement, and the High Court of Justice ruling on Wednesday that disqualified Deri from continuing to serve as health and interior minister due to his repeated criminal convictions.

Amid Netanyahu’s reluctance to anoint Deri alternate prime minister, the network reported that the Shas chairman has been refusing to take the Likud leader’s calls for the past two days.

A Channel 12 survey published Friday indicated that public support for Deri is limited. Sixty-three percent of respondents supported the court’s decision to bar Deri from returning to the cabinet table. Twenty-seven percent disagreed with the ruling and 10% were unsure.

Among voters of parties who make up the current right-religious coalition, 38% agreed with the court’s decision to disqualify Deri, while 49% disagreed. 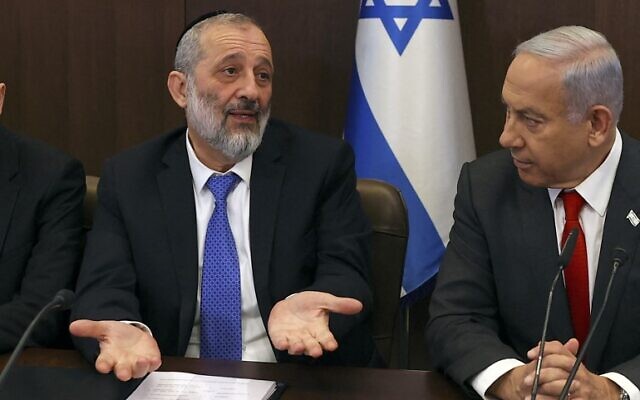 Interior and Health Minister Aryeh Deri with Prime Minister Benjamin Netanyahu at a cabinet meeting at the Prime Minister’s office in Jerusalem, on January 8, 2023. (Ronen Zvulu/Pool/AFP)

Some Shas lawmakers have argued that the decision was motivated by racism, pointing to the fact that nine Ashkenazi (of European origins) judges voted to disqualify Deri, a Mizrachi (of North African or Middle Eastern origins) Jew, while the court’s lone Mizrahi judge voted against doing so. Just 18% of respondents felt that the ruling was racially motivated, compared to 68% who disagreed and 14% who were unsure.

The 10-1 High Court ruling Wednesday determined that Deri’s dual appointments as health and interior minister were “unreasonable in the extreme” in light of his recent and past financial crimes and that Deri had misled a magistrate’s court into thinking he would retire from political life in order to evade a determination that his recent tax fraud conviction carried “moral turpitude” — a strike that disqualifies him from immediately returning to the cabinet.

Netanyahu has reportedly proposed a number of other avenues to naming Deri alternate premier, including the Knesset speaker role, which Deri is said to have refused. Channel 12 said earlier this week that the premier has also offered to pass legislation that would limit the High Court’s right to intervene on ministerial appointments — a move that the court could also block — as the coalition scrambles to find a way to bypass the court’s decision and give Deri a high-ranking position.

Making Deri alternate premier would be a long shot regardless, given legal complications lead the Shas head to even being disqualified from serving even as a Knesset member.

According to reports in the Hebrew-language press, if all else fails, Netanyahu is said to be weighing the possibility of having Deri serve as an “observer” in the security cabinet, a panel of top ministers charged with making decisions regarding Israel’s military posture, diplomatic relations and other matters of crucial state importance.

The role of alternate prime minister was created in 2020 by Netanyahu and Benny Gantz for their short-lived power-sharing government and was also utilized by the subsequent government led by Naftali Bennett and Yair Lapid, which was replaced last month. 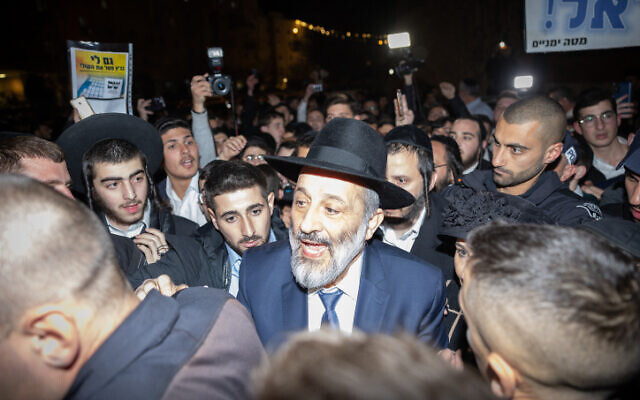 Shas chief Aryeh Deri seen outside his home in Jerusalem on January 18, 2023, hours after the High Court ruled he cannot serve as minister. (Yonatan Sindel/Flash90)

The Channel 12 survey released Friday also asked respondents how they would vote if the government agreed to opposition chairman Yair Lapid’s proposal to hold a national referendum on its judicial proposals, with 44% of respondents saying they would oppose the plans and 37% saying they would support them. The remaining 19% were unsure.

Asked whether they support the ongoing demonstrations across the country against the judicial proposals, 48% of respondents said yes, 34% said no and 18% said they were still unsure.

A Distant Dream: Why Not Many Gazans Made it to Qatar World Cup 2022