Prime Minister Benjamin Netanyahu will likely have to dismiss Interior Minister and Health Minister Aryeh Deri from his cabinet posts by Sunday morning in order to comply with the High Court of Justice’s decision his appointment must be annulled or be in contempt of court.

The Movement for Quality Government (MQG), one of the organizations which petitioned the High Court against his appointment, wrote directly to Netanyahu on Thursday insisting that he fire Deri “immediately” in order to “respect the rule of law and the separation of powers.”

The organization has requested from the attorney general that she take all available steps to ensure that Netanyahu removes Deri as swiftly as possible, and a spokesperson for MQG said the group would “insist that this happens,” but did not state when further legal action might be taken.

Although the prime minister has what is defined as a “reasonable amount of time” to fulfill the court’s order to fire Deri, that period is unlikely to extend much beyond two or three days after the date on which the court handed down the decision.

Allowing Deri to participate in the Sunday morning cabinet meeting in his roles as interior and health minister would almost certainly be considered contempt of court, legal experts told The Times of Israel, although filing for — and receiving — an actual contempt ruling would also take time.

On Wednesday, the High Court ruled that Netanyahu’s decision to appoint Deri to ministerial office was “unreasonable in the extreme” and also violated the principle of estoppel, whereby an individual cannot gain benefit from a position taken on one legal proceeding and at the same time benefit from behaving in a manner which contravenes that position.

On Thursday, Attorney General Gali Baharav-Miara sent Netanyahu a letter informing him he was required to dismiss Deri from his posts, although she did not stipulate a time frame.

A Justice Ministry official said the assumption of the court was likely that Deri’s dismissal would happen “not long after the ruling.”

According to a report by Channel 13 News, the delay in firing Deri is due to Netanyahu’s search for his replacements in the interior and health ministries.

Netanyahu has in the past taken on ministerial portfolios in addition to his position as prime minister for various reasons, but is unable to do so at present because he is currently under indictment and on trial for corruption charges.

The High Court on Thursday ruled that Shas leader Deri’s dual appointments as health and interior minister were “unreasonable in the extreme” in light of his recent and past financial crimes, and that Deri had misled a magistrate’s court into thinking he would retire from political life in order to receive a more lenient sentence in a plea bargain and to avoid a determination that his recent tax fraud convictions carried “moral turpitude,” a finding that would have automatically barred him from office for seven years.

The decision has created a severe problem for Netanyahu since Deri and his Shas party are a critical part of the coalition, and Deri has insisted that he remain in government in some form, which would likely entail either circumventing the court decision through legislation or being appointed as alternate prime minister, a position which may not be subject to the court’s ruling. 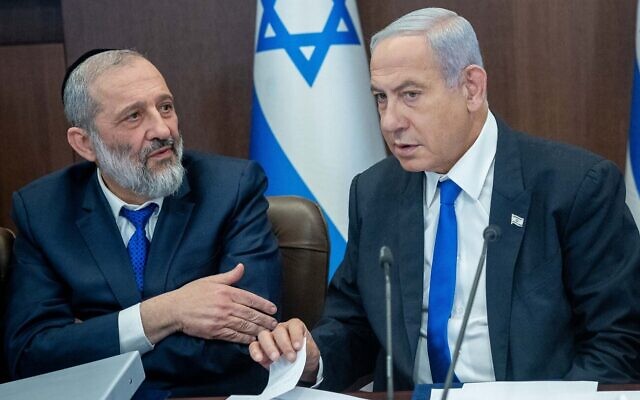 An appointment as alternate prime minister is tricky, however, as it would likely require the government to dissolve itself and then reform, and necessitates the passage of complex legislation.

Even if that were to be done, the High Court might even still invalidate that appointment as well.