Israel sees driest winter season in about 60 years, with little rainfall so far

Israel is experiencing its dryest winter so far in about 60 years, with significantly less rainfall than the corresponding period last year, according to new rainfall figures by the Israel Meteorological Service cited by Hebrew-language media on Thursday.

According to the findings, the rainfall this winter season raised the water levels of the Sea of Galilee by just 2 cm (about 0.8 inches) so far, down significantly from the corresponding periods between the start of the winter season in December and January 19 where water levels rose by dozens of centimeters and up to a meter in recent years, Haaretz reported.

Israel’s largest freshwater lake, though no longer used as the main source of drinking water, is still seen as a popular gauge of seasonal rainfall.

An average Israeli winter that runs from December to March yields an increase of about 1.6 meters (3.2 feet) in the lake’s water levels, Haaretz said.

Israel’s water authorities said the long periods between rainfalls in this first half of the winter season have led to slower flows from streams and run-offs from hills in northern regions, and have thus limited the amount by which the water levels could rise.

Eyal Wiesel, a director in the hydrological service of the government’s Government Water and Sewage Authority, told Haaretz that 2 cm was the most modest rise since 1964 when national rainfall measurements began.

People take cover from the rain as they walk in the city center of Jerusalem on December 26, 2022. (Olivier Fitoussi/Flash90)

In the winter of 2022-2023, the Sea of Galilee water levels “started to rise only on January 12,” just a week ago. It is the latest stage in the winter since 1964 when water levels began to rise, said Weisel.

Dr. Amos Porat, the director of the climate division of the Israel Meteorological Service told Ha’aretz that the winter season has so far yielded “about 40%-50%” of the amount of rainfall compared to corresponding periods in recent years, measured from the beginning of winter in December until January 19. Rainfall levels in the past four years were higher than the average, the authorities said.

Porat told Ynet that winter was not yet over and that “there is a chance that the current situation will improve, but there is a possibility that we will end the rainy season negatively.”

It is looking like “we are marching safely towards a year with little rain. I’m not using the word ‘drought,’ because it’s something the government decides and it has economic implications, but we know what we’re talking about,” Porat said.

“Winter is not over yet, but the data we see now is significant because the three main winter months are December, January and February,” he told Haaretz. However, “the amount of precipitation that has fallen so far in the region is still not unprecedented.” 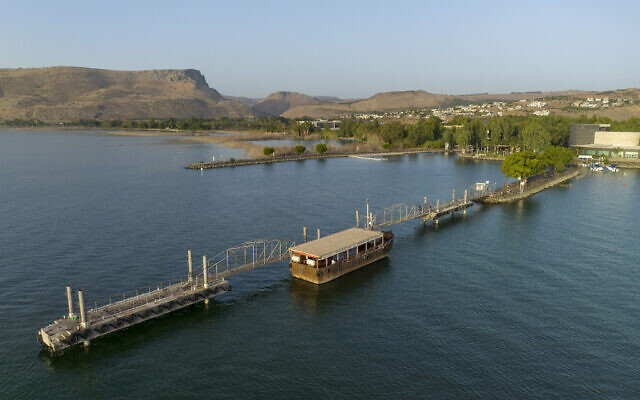 Wiesel said the current situation was “not terribly disturbing at this point,” because the past few years saw large amounts of annual precipitation.

“We went through four consecutive years in which the amount of precipitation was higher than the average, Weisel noted.

In September, the Kinneret Authority, which oversees the Sea of Galilee’s development and maintenance, reported that the lake was thriving and stayed relatively full over the 2022 summer compared to previous years, sitting only a meter below its full capacity. The lake was measured then at 3.2 meters (10.5 feet) above the so-called lower red line — the level at which water quality declines and causes damage to the ecological balance.

Last April, the Sea of Galilee sat at its highest level in 30 years when it reached 32 centimeters (13 inches) below the upper red line, according to authorities.