Sounding a defiant tone, Shas leader Aryeh Deri told members of his ultra-Orthodox party that he will not step down as minister even if the High Court of Justice rules that he is ineligible for office, Israeli television reported Monday

Deri’s appointment as interior and health minister is being challenged at the High Court, due to his conviction last year for tax offenses. Deri, who previously served jail time for an earlier graft conviction, pleaded guilty to the tax charges last year as part of a plea deal in which he resigned from the Knesset and received a suspended prison sentence.

The High Court heard appeals in the case earlier this month and is expected to issue a ruling this week on Deri, and may also weigh in on legislation passed last month for his benefit that allows an individual with a suspended sentence to be a minister.

Deri said during a Shas faction meeting Monday that he will not resign even if the court rules against him, Channel 13 news reported. The channel did not attribute the information to a source.

Several Shas politicians have stated publicly in recent days that they are fully expecting the High Court to rule that Deri cannot hold office, in a possible attempt to try and get ahead of any such ruling.

If Deri refuses to resign, it will likely fall to Prime Minister Benjamin Netanyahu to fire him. Should Netanyahu, who is himself on trial in a trio of graft cases, refuse to do so, the unprecedented rejection of the ruling would likely prompt fresh petitions to the High Court demanding he be compelled to dismiss Deri, his most senior coalition partner.

“To fire me or not — it’s Netanyahu’s business,” Deri was quoted as saying by the network.

Prime Minister Benjamin Netanyahu with Minister of the Interior and Health Aryeh Deri, during the swearing in ceremony of the new government at the Knesset, on December 29, 2022. (Yonatan Sindel/Flash90)

Shas sources expressed a similar sentiment to the Ynet news site, which reported that Deri believes the court has already decided to order his dismissal.

“The headache is Bibi’s, not Aryeh’s,” the sources said, using Netanyahu’s nickname. “He can deal with the consequences.”

A Channel 12 news report on Saturday said that if Deri is forced to step down, the coalition will expedite legislation aimed at removing a “reasonableness” test for government decisions, which allows courts to strike down moves found to be beyond the bounds of reasonability.

The legislation has been proposed as part of a wider package of laws being pushed by the government which would shift power away from courts and into politicians’ hands.

Any High Court decision to invalidate Deri’s appointment is likely to lean on the legal clause. The coalition hopes to pass a law within some two months to allow Deri to return as minister, the report said.

The High Court petitions argue that Deri’s 2022 conviction, coupled with a conviction in 1999 on bribery charges for which he served prison time, makes his appointment as minister “unreasonable.” 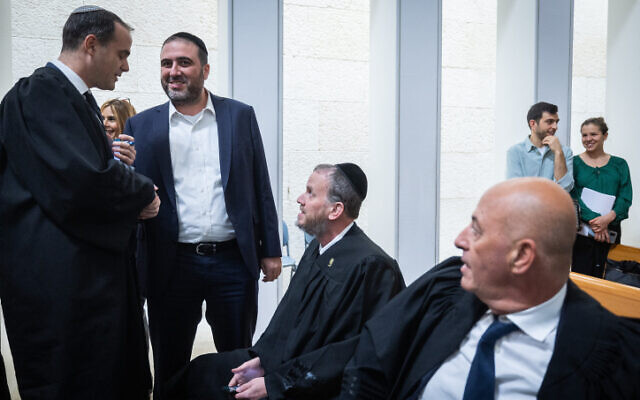 Shas MK Moshe Arbel (second from left) at the High Court hearing over the appointment of Shas leader Aryeh Deri as a minister, January 5, 2023. (Yonatan Sindel/Flash90)

During the High Court session on the petitions, judges appeared skeptical regarding the arguments of Deri’s lawyers, who posited that the court did not have the authority to overturn his appointment.

Sources close to Deri later blamed Justice Minister Yariv Levin for antagonizing the court with his legal “bombshell” announced on the eve of the hearing, in which Levin detailed his plans to radically overhaul Israel’s legal and judicial system — severely limiting the authority of the High Court, giving the government the ability to overturn rulings, handing it control over judicial selection, and significantly limiting the authority of government legal advisers.

A poll this month indicated that less than a quarter of Israelis support Deri’s appointment. The Channel 12 survey found 65 percent of respondents opposed it, 22% supported it, and 13% were unsure.

Among supporters of Netanyahu’s bloc, 43% said it was not appropriate for Deri to serve as a minister, while 42% said it was.