Hamas on Monday published a video purportedly showing an Israeli man held captive by the terror group in the Gaza Strip — the first image of hostage Avera Mengistu since he was captured more than eight years ago.

The authenticity or date of the video was unclear. Hamas’s military wing, the Izz ad-Din al-Qassam Brigades, said it was releasing the video as a message to outgoing military chief Aviv Kohavi and his successor Herzi Halevi.

Mengistu is one of two Israeli men being held by the terror group, alongside the remains of two soldiers killed during Israel’s war with Gaza-based fighters in summer 2014. Israeli authorities have been quietly engaged in fruitless negotiations for their release for years.

In September 2014, Mengistu, whose family has said he is mentally unstable, crossed into northern Gaza from the beach at Zikim. After he entered the coastal enclave, members of the terror group arrested him.

“Al-Qassam Brigades presents a video message of the captured Zionist soldier, Avera Mengistu, confirming the failure of the outgoing chief of staff Kohavi and his institution, and his lies to his people and government,” the terror group said in a statement.

“The incoming chief of staff Halevi must prepare himself to carry the burdens and consequences of his predecessor’s failure,” it added.

Hamas has repeatedly referred to Mengistu, and the second captive Hisham al-Sayed, as soldiers, despite neither of them having served in the Israeli military or security services.

The video was published as a handover ceremony between Kohavi and Halevi was taking place at the military’s headquarters in Tel Aviv.

In the short clip, a man said to be Mengistu is seen seated, wearing a button-down shirt, fidgeting and crossing his arms as he recites a short message in a low voice.

“I am the captive Avera Mengistu. Until when will I be here in captivity, me and my friends,” he is heard mumbling in the video.

“After the many years from the pain. Where are the country and the people of Israel from our destiny,” he adds in an unclear jumbled sentence.

Unlike other videos of captives held in Gaza in the past, there are no clues attesting to when the video may have been recorded.

The Prime Minister’s Office issued a brief statement following the publication of the footage, but did not confirm its authenticity.

Speaking to the Kan public radio, IDF spokesman Ran Kochav said the army was evaluating the authenticity of the footage.

“We are looking into this video. I hope the video is authentic and that Mengistu is in full health. It’s hard for me to say what the level of credibility of the video is,” he told the network.

Yallo Mengistu, the captive’s brother, said he was not sure if it is his brother in the video. “I’m excited and scared at the same time” watching the video, Yallo told Channel 12 news. “He looks like Avera, but on the other hand, it’s not 100% Avera.”

File: Families of Abera Mengistu and Hisham al-Sayed hold a press conference calling for the release of the two Israeli citizens from Hamas captivity, on September 6, 2018. (Hadas Parush/FLASH90)

The family has not seen any photos or videos of Mengistu since he crossed over into Gaza more than eight years ago. An audio file released by Hamas in June 2021 of an unidentified person who self-identifies as “an Israeli soldier” was thought to be Mengistu.

Years of efforts and lobbying by his family to have him released have been unsuccessful.

In June 2022, Hamas published a first video of the second Israeli captive, Al-Sayed, a Bedouin Israeli who crossed into the Gaza Strip voluntarily in 2015. His family says he also suffers from mental illness.

Aside from the two civilians, Hamas is also holding the remains of IDF soldiers Oron Shaul and Hadar Goldin, who were killed during a 50-day conflict with the terror group in the summer of 2014.

Israel and Hamas have held indirect talks in an attempt to reach a prisoner exchange deal. A similar deal that released Israeli soldier Gilad Shalit from Hamas captivity saw 1,027 Palestinian security prisoners released, many of them convicted terrorists. 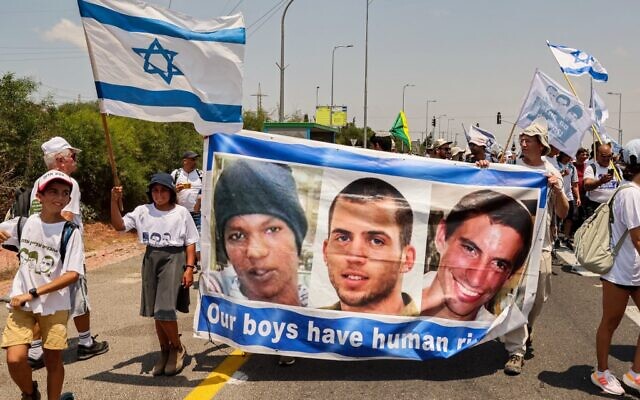 Demonstrators marching with a banner showing the faces of captive Israeli civilian Avera Mengistu, and late soldiers Oron Shaul and Hadar Goldin from the Israeli city of Ashkelon arrive at the Karmia kibbutz on August 5, 2022. (JACK GUEZ / AFP)

Egyptian intelligence, which maintains close ties to both Israel and Hamas, often serves as a key intermediary.

Efforts have so far failed to yield results. In 2021, Israeli defense officials held a round of talks described as the most significant and serious to date in light of the added pressure on Hamas from the coronavirus pandemic, which had been growing steadily in the beleaguered Gaza Strip.

Hamas is considered highly unlikely to concede on the matter of the mass release of Palestinian security prisoners, a highly contentious move that no Israeli government is likely to approve again.

The 2011 exchange to secure the release of Shalit was deeply controversial, with many in Israel’s security establishment at the time calling it lopsided in Hamas’s favor. Many of the 1,027 prisoners released later returned to terror — such as Yahya Sinwar, who now serves as Hamas’s Gaza governor.