Key figure in push for probe of Beirut port blast is arrested, let go after protests

AFP — A key figure among the families of Beirut’s 2020 port explosion victims was released Saturday after his arrest a day earlier sparked protests in the Lebanese capital.

William Noun — whose brother, a fireman, was killed in the devastating August 4, 2020 port blast — was arrested Friday over remarks made during a television program, a judiciary source told AFP.

Noun is among those who have been urging the continuation of a probe — on hold for more than a year due to political pressure — into the explosion, which killed more than 215 people, injured thousands and decimated vast areas of the capital.

“We just want the full truth, and that justice be served,” Noun told journalists upon his release on Saturday afternoon.

Known for his outspokenness, Noun had threatened during televised remarks Thursday to “blow up the palace of justice” to protest moves to replace the judge investigating the blast.

His arrest had sparked demonstrations on Friday night, while activists gathered earlier Saturday outside the Beirut police station where he was being held.

William Noun, whose brother was killed in the August 2020 Beirut port blast, is greeted by relatives and supporters upon his release from jail in the capital Beirut on January 14, 2023. (Anwar Amro/AFP)

Embattled judge Tarek Bitar has faced a series of complaints against him, part of a campaign led by the Hezbollah terror group and its allies seeking to block his probe into the blast.

The 2020 disaster, one of history’s biggest non-nuclear explosions, came after a stockpile of haphazardly stored ammonium nitrate caught fire.

On Tuesday, victims’ relatives including Noun had thrown stones at the palace of justice in Beirut, where they gathered again on Thursday in protest over Bitar’s possible replacement.

Noun’s lawyer, Ralph Tannous, told journalists on Saturday his client had agreed never to throw stones at the building again or insult judges.

Noun’s mother had spent the night at the headquarters of one of Lebanon’s security agencies along with lawyers including Melhem Khalaf, who is also a member of parliament.

“What did William do? Ask that whoever killed his brother face justice?” his mother Zeina said at Saturday’s rally outside the police station. 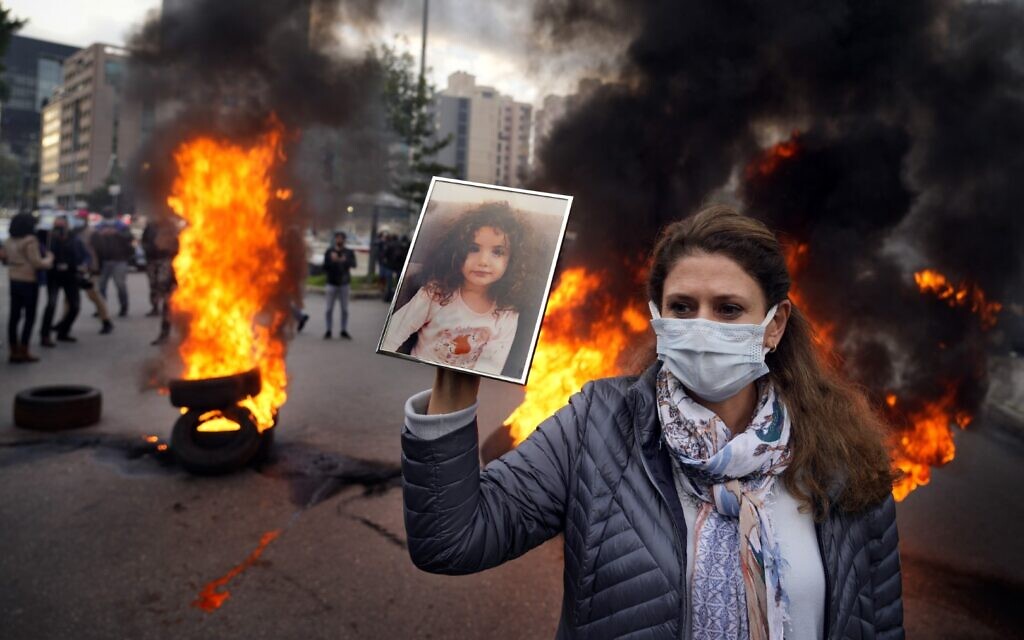 File: A woman holds a picture of her granddaughter who was killed in the deadly 2020 Beirut port explosion, during a demonstration outside the Justice Palace, in Beirut, Lebanon, Feb. 7, 2022 (AP Photo/Bilal Hussein, File)

Lawmakers, lawyers and Christian clerics had joined the protest, denouncing what they called an arbitrary arrest.

“This is an attempt to intimidate but it won’t work,” lawyer Tannous had told local television before Noun’s release. “This is a political move, not a judicial one.”

Bitar has attempted to question a former premier and four ex-ministers over the tragedy, but his probe was repeatedly obstructed before being suspended.

Aya Majzoub from rights group Amnesty International said Noun’s arrest “clearly shows that Lebanon’s judiciary is more interested in protecting those in power and those responsible for the Beirut blast than protecting the public interest.”

Relatives of victims as well as human rights groups have called for an international inquiry, which Lebanese authorities have rejected.

France is also investigating the blast, which killed some of its nationals. A French judge is due to arrive in Lebanon on January 23 to collect information.

Relatives of the victims intend to “escalate” their protest, said Paul Naggear, whose three-year-old daughter died in the blast.

“Our cause is not moving forward,” he said.

Rita Hitti, who lost her son and two other relatives in the explosion, said the Lebanese judiciary “faces a decisive test.”

“Either it speaks out and ignores all political pressure, or this is its end,” she said.

New Aten Museum in Minya to Be Open for the Public