She exposed China’s crimes against the Uighurs; now she needs the world to save them

A few years ago, one of Rushan Abbas’s nieces tried to call her mother in China. The niece, who lives in the US, was eight months pregnant and used to speak to her mom, a retired doctor, every day. But her mother, Dr. Gulshan Abbas, did not pick up that day in September 2018.

Over the next five days, the niece tried her mom again and again, always with the same result. Finally, she started to reach out to neighbors and distant relatives. That’s when she finally found out what had happened.

“They said that the police came and took her,” recalled Rushan Abbas, tears welling in her eyes.

For Abbas, the disappearance of her sister, whom she has not heard from since, was an all-too-familiar horror. A year earlier, in April 2017, the parents of her husband Abdulhakim Idris had also gone missing, along with his siblings, in-laws and nephews, two dozen family members in all. Days earlier, she had spoken out about their disappearance in the US. Her sister’s abduction appeared to be the response of Chinese authorities.

Idris and Abbas are both Sunni Muslims from China’s far-northwestern Xinjiang province. A rugged expanse of desert, mountains and grassland along what was once the northern Silk Road, today Xinjiang is best known as ground zero of Beijing’s mass campaign of persecution against the Sunni Muslim Uighur minority.

“We don’t know what happened to them. I haven’t heard from them since 2017,” Idris said of his relatives during an interview last month in Israel. “And it’s not just me. There are about 100,000 Uighurs living outside the region, about 60,000 living in Turkey and all of them have lost contact with their families. The Chinese regime has built an information wall.”

Guard towers stand on the perimeter wall of the Urumqi No. 3 Detention Center in Dabancheng in western China’s Xinjiang Uyghur Autonomous Region on April 23, 2021. (AP/Mark Schiefelbein)

Abbas and Idris were in Israel as part of a worldwide tour to raise awareness about China’s campaign against their people, which some describe as a genocide. Worldwide, Uighurs number around 12 million; about 80 percent live in Xinjiang, which they also call East Turkestan, making them China’s fifth largest minority. Since 2017, according to estimates, Chinese authorities have sent more than 1.8 million Uighurs to forced labor camps, leaving their families in the dark about their whereabouts or well-being.

“The Chinese regime sometimes publishes names of people who died of diseases in the camps, but since they were taken in 2017 I have not received any information about my parents,” Idris said. “If I knew they had passed away, I would go into mourning, and cry for them. Not knowing makes it very difficult for me.”

China initially denied the existence of internment camps in Xinjiang but later changed tack, describing the compounds as vocational training centers for Uighurs who could otherwise be lured into Islamic extremism. Critics describe the education doled out at the camps as political indoctrination; Beijing, which has little appetite for dissent, has long been vexed by separatist groups from the region and has justified its campaign by pointing to a series of terror attacks carried out by Uighur extremists over the last decade.

Witnesses and survivors of the camps say arbitrary detention is just the first of a long list of potential crimes against humanity carried out at the centers, which also include forced labor, rape, sexual abuse, involuntary medical treatment, torture, unsanitary conditions and more.

“These people in the camps, they are not charged with any crimes and they are subject to constant mental and physical torture,” Abbas said. 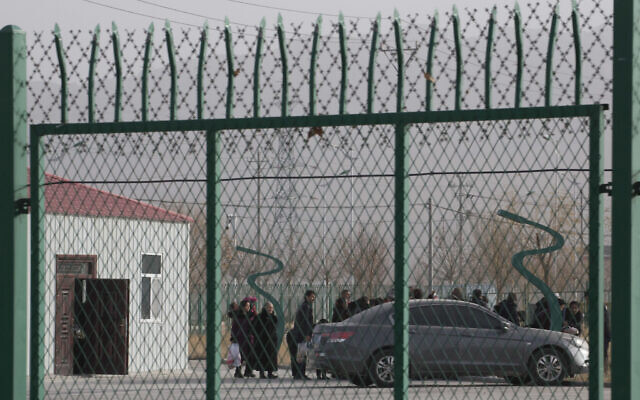 In this December 3, 2018, file photo, residents line up inside the Artux City Vocational Skills Education Training Service Center, which has previously been revealed by leaked documents to be a forced indoctrination camp at the Kunshan Industrial Park in Artux in western China’s Xinjiang region. (AP/Ng Han Guan, File)

In 2020, a Pulitzer-Prize-winning investigation by Buzzfeed News revealed the extent of China’s network of mass incarceration sites, pinpointing over 250 detention centers around Xinjiang via satellite photos and eyewitness testimony. Foreign nationals who had been interned and later released have reported being separated from their families, forced to strip without any privacy, had their jewelry taken, were injected with foreign substances and made to take chemicals to disrupt menstruation and then forced into hard labor, mainly picking cotton.

“They treated us like livestock,” a Kazakh pharmacist who was detained told the news site.

Even before the publication of the article, China’s campaign against the Uighurs was one of the world’s worst-kept secrets. Over the last decade, the Uighur diaspora in the West has worked to relay what little information comes out of China to reporters, policymakers and the wider world.

According to Abbas, Buzzfeed’s tally of 262 camps falls well short of the actual size of China’s prison network, which she estimates contains 1,500 to 2,000 internment centers.

“Each of them holds about 2,000 people or more. You do the math,” she said, putting the number of detainees at 3 million or more.

Beyond the physical torture they endure, those sent to the camps are subject to methods designed to pulverize any sense of themselves as anything but loyal Chinese citizens.

“They have to pledge themselves to the Communist Party and denounce their ethnicity and their religion,” Abbas said. “There is also forced marriage. The Chinese government is offering money, housing, and jobs for Han Chinese men to marry Uighur girls. If a woman refuses such a forced marriage, her entire family will be sent to the camps.” 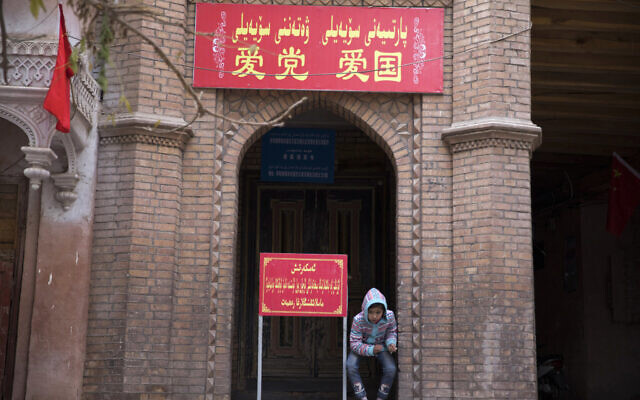 A child rests near the entrance to the mosque where a banner in red reads ‘Love the party, Love the country’ in the old city district of Kashgar in western China’s Xinjiang region, Nov. 4, 2017. (Ng Han Guan/AP)

The Chinese Consulate in New York responded to BuzzFeed’s story by claiming that “the issue concerning Xinjiang is by no means about human rights, religion or ethnicity, but about combating violent terrorism and separatism. It is a groundless lie that a million Uighurs have been detained in the region. Xinjiang has set up vocational education and training centers in order to root out extreme thoughts, enhance the rule of law awareness through education, improve vocational skills and create employment opportunities for them so that those affected by extreme and violent ideas can return to society as soon as possible.”

The Chinese embassy in Tel Aviv did not respond to requests for comment.

Abbas, whose activism dates to her time at Xinjiang University in the 1980s, started Campaign for Uyghurs in 2017, around the time China began ramping up its activities against the community.  She said she was spurred to action after hearing a story about a friend’s brother, a scholar and well-known writer who had been editor of a popular literary magazine in Urumqi, the regional capital.

“When the police came to take him to the forced labor camp, he chose to jump to his death from the eighth floor of an office building,” she said.

In 2018, Abbas met with experts from the Hudson Institute, a conservative think tank in Washington, DC, where she spoke about the camps and the disappearance of her husband’s family.

Six days later, her sister disappeared. She does not think the timing was coincidental, but rather Chinese retribution for her decision to speak out.

“There are not many Uighurs who are active like us, partly because the Chinese government uses violence and kidnappings against anyone who has relatives there, as happened to my sister,” she said.

Nonetheless, she has continued to sound the alarm about China’s activities, speaking to Congress and officials in the US and around the world about what is happening in Xinjiang. 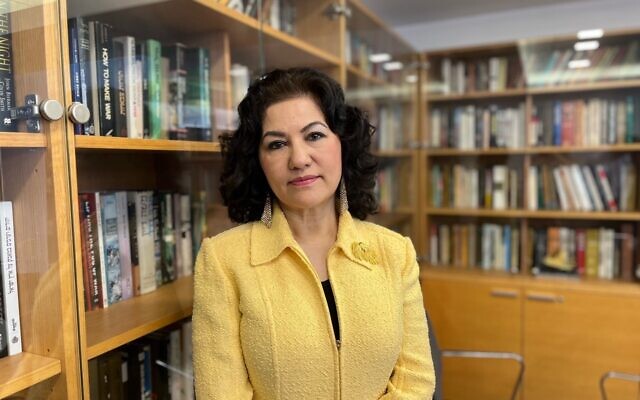 The trip to Israel, which was sandwiched by stops in Jordan and Saudi Arabia, was officially organized around a screening of “In Search of My Sister,” a movie about Rushan Abbas’s efforts to find Gulshan, directed by Canadian independent filmmaker Jawad Mir.

Abbas’s relationship with the US government goes back to the late 1990s, when she worked for the Uighur-language service launched by Radio Free Asia, a US propaganda arm.

She later served as a translator for a group of Uighur men who had been captured by the US following the attacks of September 11, 2001, and sent to the notorious prison camp at Guantanamo Bay in Cuba. The US government later admitted that they had been mistakenly detained, though it took until 2021 to find suitable countries willing to take the last of them in.

“It took a while to realize that these are innocent people,” she recalled. “I used to sit with them in their rooms and bring them fruits and sweets. At first, I was a little worried because I didn’t know who they were, but after a period of investigation, I realized that they were simple people who were happy to meet me. And they preferred to be imprisoned in an American camp than to be sent back to Pakistan or China.” 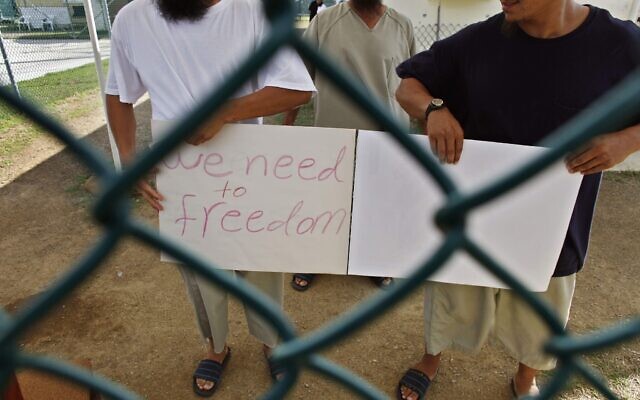 In this June 1, 2009 file photo, reviewed by the US military, Chinese Uighur detainees, who at the time were cleared for release, show a home-made note to visiting members of the media in Camp Iguana detention facility at the Guantanamo Bay US Naval Base in Cuba. (AP/Brennan Linsley)

Her trip to Israel came at a potentially sensitive time in Israel-China relations. Under previous governments headed by Prime Minister Benjamin Netanyahu, Israel shied away from criticizing China over Xinjiang and attempted to resist US pressure to crimp its trade relationship with the Asian giant. That appeared to shift under the Naftali Bennett-Yair Lapid government, which twice voted at the UN to condemn China over its persecution of the Uighurs. On October 31, 2022, a day before the election that restored Netanyahu to power, Israel joined 49 other countries as signatory on a statement backing a UN human rights report that highlighted China’s abuses in Xinjiang.

Israel had reportedly been lobbied by Beijing to join the 66 countries that supported a Chinese statement deploring the report. 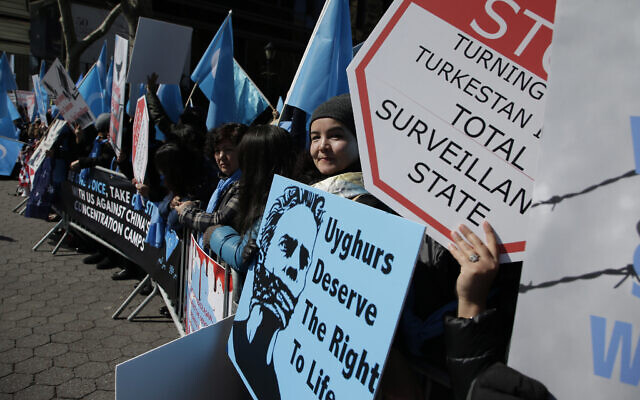 Uighurs and their supporters rally across the street from United Nations headquarters in New York, March 15, 2018. AP/Seth Wenig)

Both Abbas and Idris preferred to not to answer when asked if they had met with any Israeli officials during their visit, which was backed and aided by the State Department and the US Embassy, which tried to arrange meetings. According to Abbas, she and Idris regularly speak to Jewish community groups and at Holocaust centers; while she is careful not to downplay the uniqueness of the Nazi genocide of the Jewish people, Abbas and others also see ghastly similarities.

She recalled a conversation with Avi Hoffman, a Yeshiva University rabbinical student, at a 2021 rally outside of UN headquarters in New York.

“Something he said stayed with me,” she recounted. “He said that listening to what happened to the Uighur people, the Jewish people have 6 million reasons why they should take firm action and stop the atrocities.”