Do you see the light? Descendant of Hasidic scholar teaches ‘Primordial Torah’

The now 47-year-old Kabbalah scholar and teacher Zvi Ish-Shalom was in his early 20s when he began experimenting with esoteric Kabbalistic practices and suddenly found himself moving through a period of “profound energetic and psychic upheaval.”

“It’s all fun and games until you lose an ‘I,’” said Ish-Shalom playfully, during a recent interview with The Times of Israel. “And then it gets pretty terrifying.”

The entirety of that experience, which included shifts in how he perceived reality, would lead to a “cataclysmic shift” in his relationship to God, Torah and his Jewish lineage.

This defining period of his life set him on a journey of self-discovery, but also on a professional path that would eventually lead to where he is today: teaching others how to access similar types of insight experiences, through offerings he provides in workshops, on retreats, and in books.

He calls the teachings “Kedumah,” or “the Path of Primordial Light.”

Born in Israel into Hasidic rabbinic lineage and named after his great-grandfather, Rabbi Tzvi Hirsch Friedman, author of the “Tzvi Hemed,” Ish-Shalom grew up in a Modern Orthodox Jewish home in Brooklyn and studied in religious schools.

“I remember as a teenager deeply immersing myself in a Talmudic [topic] and having a [new idea] reveal itself. In those moments, I would feel a sense of the sacred, of the divine bursting through. That was a source of spiritual connection for me long before I knew about Kabbalah, hasidut, and mysticism,” he recalled, using the Hebrew word for Hasidism.

But it was practicing Jewish mysticism that shepherded him toward what he describes as direct experiences of the divine and its benevolent spirit.

“I opened to a radically different mode of human experience which I had no context for, and there was no one at the time I could talk to about it. So I turned to my tradition,” he said.

Zvi Ish-Shalom addresses a class on the Path of Primordial Light in an undated photo. (Courtesy)

Ish-Shalom does not get into the specifics of how reality appeared to shift, but he explained some of the practices he experimented with, including contemplative methods such as meditation, visualizing the divine names and talking directly to God.

He admitted that at times he worried he was going crazy, something Kabbalistic texts warn practitioners about.

“I feel very blessed that I was raised in a way that gave me access to the tradition so that I could go and actually study these [Kabbalistic] texts,” he said. “That was a huge support for me in understanding my experiences, as well as understanding how it’s possible to simplify the mechanisms of these experiences in a way that can be shared and duplicated by others. The teachings of Kedumah are just that: one expression of the ancient technologies of awakening reformatted for a contemporary person to have direct experience of the primordial light.” 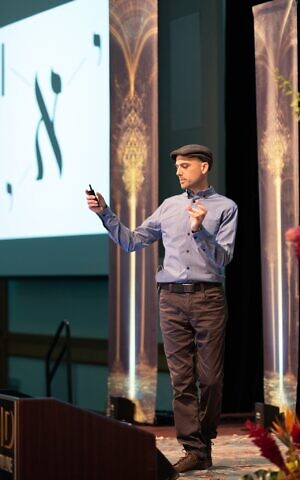 Zvi Ish-Shalom lectures about the Path of Primordial Light in an undated photo. (Courtesy)

Already trained in the classics at McGill University, Ish-Shalom enrolled in a graduate program in Jewish mysticism at Brandeis University as a way to deepen his knowledge of Kabbalah. Simultaneously, he studied with the late Tosher Rebbe of Broisbriand, Quebec, in the Hasidic dynasty of his great-grandfather. Though he ultimately received rabbinical ordination, Ish-Shalom says that wasn’t his intent when he began his studies. Rather, he says, he was searching to better understand the spiritual transformation he was going through.

“My whole life became about integrating,” he said.

In fact, it would take many years of integrating his experiences before Ish-Shalom would feel ready to share with the outside world what happened to him in his 20s. In 2004, he moved to Colorado at the suggestion of his mentor and friend, the late Rabbi Zalman Schachter-Shalomi (one of the founders of the Jewish Renewal movement) who was at the time the holder of the World Wisdom Chair at Naropa University.

My whole life became about integrating

The two met one summer many years prior at the original Elat Chayim Center for Jewish Spirituality, then located in the Catskills. Ish-Shalom was a 20-year-old intern. Schahcter-Shalomi was there to teach. Ish-Shalom recalled how they first met and connected over a similar background: being born and raised in Orthodox families, but venturing outside of that paradigm to explore an interest in other expressions of Judaism. 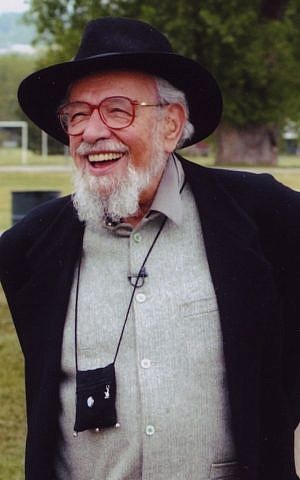 They kept in touch in the following years, and it was Schachter-Shalomi who would connect Ish-Shalom with a congregation in Fort Collins, Colorado, in need of a rabbi, and who a few years later, upon his retirement from Naropa, would encourage Ish-Shalom to apply for the faculty position he was vacating.

It was while teaching full-time at Naropa that Ish-Shalom started to “feel a calling” to share a body of teachings that had been coming to him over the years while meditating, as well as during informal contemplation.

“Reality reveals things,” he said. “Downloads come through that [meditative] space. It was in these contemplative spaces these teachings were revealed to me.”

In 2014, he invited students and local friends to meet informally with the intent of sharing the new teachings with whoever was interested or curious. The meetings were casual, and Ish-Shalom showed up without a formal agenda or curriculum. The 11 gatherings that would follow were recorded and eventually transcribed in 2017 as the almost 400-page “The Kedumah Experience: The Primordial Torah.”

Published five years later in 2022, the 145-page “The Path of Primordial Light: Ancient Wisdom for the Here Now” is much shorter, a condensed transmission of the information and practices first conveyed in 2014 with a focus on practical guidance for those seeking an “experiential shift in consciousness.”

There is an ancient Hebrew text that speaks of a “Torah Kedumah,” a “Primordial Teaching,” Ish-Shalom writes, that existed before the creation of the world. “This is not the Torah as it is known in conventional terms: it is something far more mysterious — something pre-existent and pre-creation.”

Mystically speaking, Ish-Shalom explained, the term refers to the cosmic source of creation, the hidden light that illuminates all of reality. It’s this light that is at the core of his teachings. 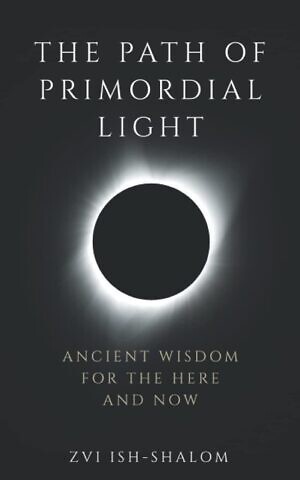 ‘The Path of Primordial Light: Ancient Wisdom for the Here Now’ by Zvi Ish-Shalom. (Courtesy)

“As it says in the Book of Proverbs, Torah is light,” he explained. “In my experience, there is a light that’s animating reality that is typically hidden from view, veiled from our ordinary perception. With practice through grace, it’s possible for those veils to be lifted and for us to perceive directly the hidden light of creation.”

“The Path of Primordial Light” (the book) aims to offer easy-to-follow practices for people of all backgrounds — both those identifying as Jewish and not — who seek profound and embodied states of awareness of this light, or simply an inner sense of freedom or healing.

The Kedumah spiritual path draws from traditional Jewish practices, as well as Jewish mysticism, however Ish-Shalom emphasized that there is “no requirement for tribe or faith or allegiance to Judaism or any other religion in order to participate.”

“We can’t call it Judaism,” he said. “The practices don’t orient from the same set of assumptions as Judaism. There are no ritualistic requirements. It offers an orientation to Judaism, though, that can be potentially rich and satisfying to someone who is called to spiritual awakening and depth in their Jewish practice.”

Judaism or not, “The Kedumah Experience” is clearly the work of an academic: It includes more than 70 pages of notes and works cited, including references to the Talmud, the Zohar, and modern Kabbalistic commentary. “The Path of Primordial Light” refers often to Hebrew words and Torah narratives, guiding the reader experientially with practices, such as breathwork, chanting and guided imagery.

Certainly, the books and the teachings are geared toward individuals with an interest in personal development, transpersonal psychology, or “spiritual awakening.” However, Ish-Shalom is careful to clarify that he doesn’t see Kedumah as some romanticized version of spirituality. The path can at times be quite uncomfortable, he said.

“Kedumah is one attempt to distill the core principles of spiritual awakening and depth that is intrinsic in the Jewish spiritual path and make it available to anyone in the world who resonates with the frequencies this lineage carries,” Ish-Shalom said.

“I share these teachings as art… and perhaps it will touch some people and inspire them,” he said. “[George] Gurdjieff talks about the difference between subjective and objective art. With objective art, the idea is to… share whatever stream of inspiration one experiences coming through them. The art is an expression of that stream, that current.”

“If someone resonates with this art, this current,” he said, referring to Kedumah, “then it’s useful.”